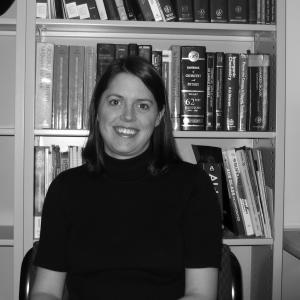 My research efforts have been focused on four projects:  1) Direction of case studies with C-Core faculty, 2) Exploration of students’ ability to link 3 levels of chemical understanding; macroscopic, sub-microscopic, and symbolic, in 2a) a virtual lab module, and 2b) a card sort task; 3) Improvement of the Chemical Concept Questionnaire (CCQ) as a tool to assess students’ conceptual understanding of chemistry; and 4) The development of a simulation to model the role of energy in bond breaking and forming events on a small particle level.

Change at the Core (C-Core) is a professional development program for faculty in the Colleges of Science and Engineering and Huxley College for the Environment.  Together with internal evaluator of this project, Dan Hanley, I have been directing a group of 3 students in collecting and analyzing data related to the implementation of instructional strategies as a result of C-Core.  Four participants have agreed to be part of this study.  My group has been videotaping select classes, interviewing faculty, collecting assessment results, and collecting student survey and interview data.  These students have been systematically analyzing these data in order to provide a snapshot of how C-Core faculty implement their learning from C-Core into their classrooms.  We are currently at a point where we have an idea about a range of practices being implemented after some initial professional development.  We are planning to write an article describing this range of practices, the reasons why some of them may be adopted more easily than others, as well as student responses to changes in instruction.

2) Three levels of representation/understanding in chemistry

One of the documented problems of student learning in chemistry is the difficulty many students have in linking macroscopic (observable) chemical phenomena with submicroscopic explanations/models, and then translating these models into and from symbolic representations such as chemical equations (Gilbert & Treagust, 2009).  Experts translate between these levels fluently and often subconsciously, while novices do not.  While this issue has been documented in various research reports, little is known about the cognitive processes at work in making such links.  Knowledge of these processes would inform the development of learning activities to support them.

2a) In 2012, half of the Chem 121 labs were substituted with virtual lab modules.  While there are drawbacks to a virtual lab, in terms of a student’s inability to learn physical laboratory skills, virtual labs, if designed well, have the potential to improve student learning over wet labs in important ways.  One advantage to a virtual environment is that it can dynamically model the sub-microscopic environment of atoms and molecules, which cannot be seen in a purely wet lab environment.  Furthermore, such models can be situated alongside macroscopic and/or symbolic representations, to aid in translation between the three (Chiu & Wu, 2009).  Our goal with this study was to study student dialogue when engaging in the virtual lab modules to investigate how, if at all, the virtual environment supports students’ linkages between the levels of representation.

2b) Another goal in my research group is to be able to assess students’ ability to connect the three levels of representation and document changes in these abilities with increasing levels of education.  We hypothesized that a students’ ability to link the three levels, or their “multirepresentational competence,” is related to the construct of knowledge organization.  We therefore turned to the literature on knowledge organization from the field of physics education research, and based our study on a cardinal paper in that field, which describes the use of a card sort task to get at this construct.  Subjects were given cards that each represented a physics problem, and were asked to sort them into piles that represented similarity.  The authors found novices most often sorted by “surface features,” such as whether the card contained a representation of a plank or a lever, whereas experts sorted by “underlying principles,” such as the conservation of energy (Chi, Feltovich, & Glaser, 1981).

In collaboration with Todd Haskell (WWU, cognitive psychology), we created a set of nine cards, each containing a quantitative chemistry problem, with the level of representation (macro, submicro, symbolic) depicted in the problem crossed with underlying concepts (stoichiometry, % mass, dilution).  These were chosen because they all represent content taught in chemistry 121, are at a similar difficulty level, and are taught in the course of about a month back to back. Participants, which span multiple levels of education in chemistry, are then asked to group the cards according to which ones belong in the same chapter of a general chemistry textbook.  Participants’ card groupings are then analyzed to see if the cards were sorted based on the underlying chemistry topics (e.g. all the dilution cards are grouped together) or by the level of representation (e.g. all the symbolic cards are grouped together).

Chemistry lags behind some other scientific disciplines in the availability of valid and reliable summative assessment instruments to measure the effectiveness of educational treatments.  Although the Chemical Concepts Inventory (CCI) (Mulford & Robinson, 2002) has been used for such purposes, studies show that it can be improved to measure interventions more sensitively and accurately.  Over several iterations, we have created a new instrument called the Chemical Concepts Questionnaire (CCQ), by combining select items from a number of other instruments (Nurrenbern & Pickering, 1987; Peterson, Treagust, & Garnett, 1989; Williamson & Abraham, 1995; Yezierski & Birk, 2006) with select items from the CCI. In collaboration with Xiufeng Liu, a statistician with a specialization in psychometrics of educational assessment instruments, and his group at SUNY Buffalo, we used Rasch analysis to determine several properties of the instrument and its dimensions.  Rasch analysis is based on a model which determines item difficulty and person ability separately, based upon individual response patterns.  The partial credit Rasch Model, which was the one used in this study, is expressed as the equation below, where Dik is the difficulty level k of item i, and Pnik is the probability of person n with an ability Bn responding at level k of item i (Masters, 1982).

The properties we investigated using Rasch analysis include the validity of individual items (based on how well they fit the Rasch Model), the instrument’s internal consistency as both a unidimensional and multidimensional instrument, and the fit between item difficulty and person ability.

It is well documented that students (even at the graduate level) in chemistry often believe bond breaking is exothermic (is accompanied by a release of energy to the environment) and bond formation is endothermic (is accompanied by an absorption of energy from the environment), when in reality the opposite is true (Barker; Nakhleh, 1992).  I, and others in the chemical education community, believe the reason for this is we often talk about energy transfers and transformations in chemical systems at the macroscopic scale and don’t tie these to interactions between small particles.

The simulation shows bonds being broken through collisions with other small particles, and a consequent temperature decrease in the system.

I have been working on a simulation with the PhET group at CU Boulder (this group, founded by Carl Wieman, is well known for their science and math simulations) to model how collisions between atoms and molecules in bond breaking and formation events. I have developed learning goals for this simulation and mocked up several iterations of it already, working toward making the interface more interactive, intuitive, and rich each time.