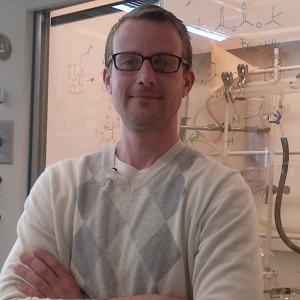 A ligand based reduction reaction diagram Carbon dioxide (CO2) is a significant environmental contaminant, and sensible methods of CO2 utilization are needed for its mitigation as a greenhouse gas.  The production of CO from CO2 is an attractive route to utilization of CO2 as a C1 source. CO is produced industrially by steam reforming fossil fuels to produce syngas and is a versatile chemical precursor and fuel.  Nature utilizes CO2 as a C1 source on an immense scale for the synthesis of organic molecules.  One example is the Ni,Fe-CODHase enzymes, which utilize late first-row transition metals to mediate the reduction of CO2 (or oxidation of CO) despite the large bond enthalpy of the C═O double bond in CO2 (532 kJ/mol).  We have recently developed a research program dedicated to reduction of the CO2 molecule into useable C1 sources, such as CO, utilizing earth abundant metals.  We have reported a ligand-based reduction cycle for the CO2-to-CO conversion (with subsequent release of CO) based on iron(II), a redox-active pyridinediimine ligand (PDI), and an O atom/oxide ion acceptor.  The CO2-to-CO reduction on iron(II), and is achievable based solely on the redox activity of the PDI ligand system.

A diagram of a Redox-Active LigandRedox-inactive metals are often used in combination with redox-active transition metals in synthetic and biological systems to invoke reactivity involving electron transfer.  One particularly fascinating example is the role of the redox-inactive Ca2+ in the oxygen-evolving complex of photosystem II.  Another is the Haber–Bosch process, which is carried out on potassium-promoted iron surfaces.  The addition of redox-inactive Lewis acids shows enhanced electron-transfer rates, more positive reduction potentials, and enhanced rates of dioxygen activation in synthetic chemical systems. They also facilitate O–O, N–N, and H–H bond cleavage, as well as enable O- and H-atom transfer.  Our group has been investigating the role of the secondary coordination sphere in complexes containing redox-active ligands of the pyridinediimine (PDI) scaffold. We have shown that pendant Bronsted bases/acids are capable of stabilizing rare intermediates and tuning the reduction potential of the ligand-based redox-active sites.  We are also investigating the positioning a Lewis acid binding site in the secondary coordination sphere and how they affect the reduction potentials in the PDI system (similar to redox-responsive pendant crown ferrocene systems).